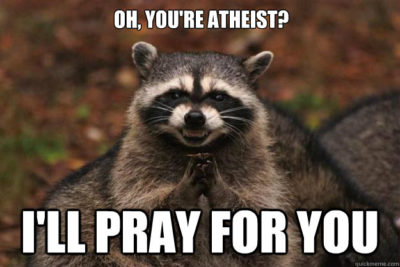 As a long-time atheist the phrase “I’ll pray for you” is generally and usually a phrase I disdain. All too often religious people use that phrase the same way Southerners use “bless your heart“. It is a passive aggressive way to tell the other person that they’re hopelessly wrong about whatever theological or philosophical difference you may have. It is also often a cop out in the face of real problems another person may be experiencing.
“Oh my. You broke your leg and can’t work for the next 12 weeks? I’l pray for you.”
“Your spouse died and you don’t have money for Christmas gifts for your children? I’ll pray for you.”

The effectiveness of intercessory prayer has been studied in depth, and the results are as expected. Prayer isn’t anymore effective than chance.

All of that said, however, I recently had a softening of my heart regarding “I’ll pray for you”. My wife and I rehomed a beautiful German Shepherd Dog about three months ago. He is gentle, sweet tempered, and friendly. He is a wonderful addition to our canine pack, and we quickly (as in within hours!) fell in love with Drake.

Within a month of bringing him into our lives, he began experiencing loss of muscle control in his hind quarters. His legs would just drop out from underneath him while he was trying to play, or, worse, walking up the stairs. At first we thought is was typical hip dysplasia that GSDs are prone to, but an exam by our (wonderful) vets revealed it was most likely a spinal problem. They used every trick in their doctor bag to heal our dog, but nothing was working. They suggested a visit to a canine neurologist for an MRI and treatment. The MRI revealed a minor spinal condition that could be fixed without surgery, but it also revealed myriad problems with Drake’s internal systems. He had fluid in his chest cavity, an alarming problem with his spleen, a mystery mass on his back muscle, and partially enlarged heart. We rushed him that same day to an emergency vet clinic for a sonogram and had his chest fluid drained and sent for testing. Things weren’t looking good for Drake, and we were afraid we would have to put him down much earlier in his life than we wanted. Earlier this week our vet confirmed that things weren’t looking good, but we had one more option – a full diagnostic sonogram with a veterinary internist to isolate the cause of the fluid on his chest and/or the severity of the issue with his spleen. I shared all of this information on my Facebook page (because it is the 21st century and that’s what you do to stay connected with friends). My FB friends and my family know I am an atheist. They know I have no belief in things supernatural, but that didn’t stop them posting things like “praying for Drake”, “sending healing angels and prayers”, “keeping you and Drake in our prayers.” And none of that bothered me. And I had an “ah ha” moment about how “I’ll pray for you” can be a Good Thing.

Amidst the posts appealing to a supernatural force were secular regards as well.
“Hope he gets well soon!”
“Go, Drake!”
“Healing drool from the Dog Army!”

All of those are the equivalent of “I’ll pray for you.” Every one of them. They have the same measurable effectiveness on the actual healing process as prayer (none). What those posts, messages, and emails did was make me feel better. It made my wife and me realize that we had friends who cared about our happiness and well being. Those simple words were comforting to us. We were touched that so many people took even just a small bit of time out of their days to express sympathy and empathy with our sadness and concern.

True, some of them may have thought that their typed appellations to a supernatural force would somehow be effective in Drake’s treatment, but that is on them. The effect on us was emotionally real. It made us just a bit less sad, and certainly helped us feel like Drake had more than just a few people who cared about his doggie self.

Then there was the action instead of or in addition to prayer. An old friend – someone I haven’t had much contact with since we went to high school together over 30 years ago – set up a GoFundMe campaign for Drake to help us offset the expenses we incurred in trying to get him well. Catherine never offered prayers or well wishes or good vibes. She did something tangible to help us, and not a few of the “prayer warriors” followed up their prayers with donations. They put their words into an action that will directly help us and Drake. The more we can afford to do for him, the more we can do for him. So here we are at Festivus, and our Festivus miracle came on Festivus eve when our wonderful vet called – from her car, with her family, on the way out of town for the Christmas holiday – to tell us that after all of the tests, and pokings, and proddings, and re-tests, and verification, the fluid had not returned, his heart was not enlarged, and his spleen, while still damaged, was not in need of surgical removal. Drake has a pretty nasty infection, but one that can be treated with antibiotics. And then we can do the minor thing we need to do to fix his spinal issue.

Drake will be with us for more time than we thought we had with him just a week ago.

And your prayers – while not magic spells – helped us feel better.