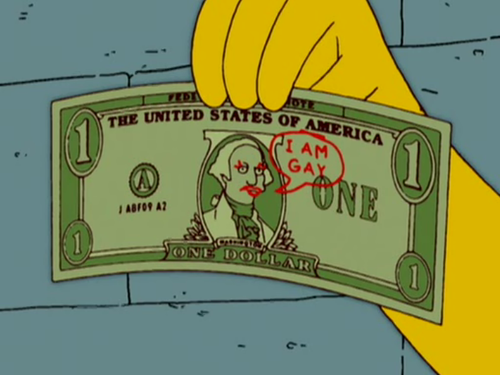 Franklin Graham, son of evangelist Billy Graham, announced on Facebook that he was closing his ministry’s accounts at Wells Fargo and moving to BB&T because of this ad.

I applaud Graham for using the power of the Free Market to express his disdain for what he calls “the tide of moral decay that is being crammed down our throats by big business, the media, and the gay & lesbian community”.

Back in 2012 Chick-fil-A COO Dan Cathy made some comments expressing opposition of marriage equality, and the Chick-fil-A charity, WinShape, actively supported political organizations that opposed LGBT rights. Many folks, me included, voiced opposition to CFA and even boycotted the business.

So here’s the problem with selective moral outrage. It is impossible to do it without being at least a partial hypocrite. “What?!?!” Yeah – being outraged by a TV ad or a company’s charitable donations is impossible to maintain.

Graham announced his outrage on Facebook – a company that actively supports LGBT rights and equality. He undoubtedly used a computer running either Microsoft Windows or a Mac OS, products of two companies that are also advocates of LGBT equality. He may have used Google to research other commercial banks in North Carolina, and Google is also a supporter of LGBT rights and equality.

In fact, it is almost impossible to not do business with a company that does not support LGBT equality. Just look at this list! Amazon, Disney, Ford, Marriot, General Mills, Proctor & Gamble, and as of 2013 even WalMart – imagine trying to exist in the USA with companies that support Graham’s position. In fact, 14 of the top 20 Fortune 500 companies have a 100% equality rating from the Human Rights Campaign – that includes WalMart, Chevron, Apple, General Motors, Ford, AT&T, and CVS.

But I’m not going to just pick on Graham and the dozens of people who agree with him. I’m also going to pick on me.

Yeah, I was pissed off at Chick-fil-A. I refused to even eat CFA products that were brought in to work by other people (quietly refused – I didn’t get on a soap box about it [there isn’t a soap box that can support my bulk]). But, well, dammit, CFA went and did a Good Thing by partnering with a coffee company that buys directly from the farmers and supports eco-friendly growing practices. Then Dan Cathy, while not backing down from his pro-traditional marriage stance, admitted that CFA needed to back off of support of groups that alienate potential customers.

But you know what other companies I give money to that rank low on the equality scale? Avery Dennison (the computer labels company), BJs Wholesale Club, occasionally Bed, Bath, & Beyond, Chipotle, and yeah Cracker Barrel – not to mention the TV shows I watch on Fox TV.

Fortunately, it has become easier for supporters of LGBT equality to not be hypocritical with our dollars since virtually every corporation in the USA is at least mostly supportive of our friends, neighbors, and families.

For those of you who agree with Franklin Graham and want to spend your money with companies that support your world view, your choices are fading away.