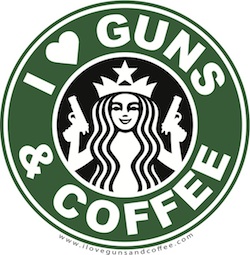 Back in 2010, a group of “concerned citizens” (we’ll call this group the “antigun” or AG) noticed that another group of folks who were carrying pistols (we’ll call this group the “progun” or PG) were meeting on a regular basis in a Starbucks shop in California. The AGs, represented by the Brady Campaign, asked Starbucks to ban the PGs from the store – just like they had convinced Ikea, California Pizza Kitchen, Peets Coffee, and others to do.

Starbucks Corporation did not comply with the AG request, and issued a statement that deferred to local law when it came to having guns in their stores. They were neither AG nor PG – they just wanted folks to come in and give them a lot of money for their meh to belch coffee drinks. The AGs and PGs went nucking futs. Both sides were convinced that Starbucks was pro-gun. The PG crowd even started a Starbucks appreciation day to encourage everyone who was legally permitted to do so to open carry into Starbucks on a particular day and buy a mediocre coffee. Yes, I participated, but not because I’m a big gun guy. I appreciated Starbucks truly neutral stance and deference to local law instead of issuing a statement or policy that would have made them truly anti or pro gun.

But this neutrality just wasn’t enough for some people. Assholes from the AGs and the PGs decided to use Starbucks as their symbolic spokes-company for their particular stance. Videos started showing up on YouTube of what I can only call PG dickheads carrying rifles, including the “scary” AR-15,  into Starbucks just so they could record the reactions of people and cockily sit in the store or on the patio and talk about their legal rights.

The AGs protested, petitioned, and demonstrated to try to force Starbucks into bowing to their wishes and make their stores gun free.

Finally it became too much for poor old Starbucks. They tried and tried to stay out of the fray, but in September of 2013 they finally made an official policy about the whole gun thing:

Few topics in America generate a more polarized and emotional debate than guns. In recent months, Starbucks stores and our partners (employees) who work in our stores have been thrust unwillingly into the middle of this debate. That’s why I am writing today with a respectful request that customers no longer bring firearms into our stores or outdoor seating areas.

From the beginning, our vision at Starbucks has been to create a “third place” between home and work where people can come together to enjoy the peace and pleasure of coffee and community. Our values have always centered on building community rather than dividing people, and our stores exist to give every customer a safe and comfortable respite from the concerns of daily life.

We appreciate that there is a highly sensitive balance of rights and responsibilities surrounding America’s gun laws, and we recognize the deep passion for and against the “open carry” laws adopted by many states. (In the United States, “open carry” is the term used for openly carrying a firearm in public.) For years we have listened carefully to input from our customers, partners, community leaders and voices on both sides of this complicated, highly charged issue.

Our company’s longstanding approach to “open carry” has been to follow local laws: we permit it in states where allowed and we prohibit it in states where these laws don’t exist. We have chosen this approach because we believe our store partners should not be put in the uncomfortable position of requiring customers to disarm or leave our stores. We believe that gun policy should be addressed by government and law enforcement—not by Starbucks and our store partners.

Recently, however, we’ve seen the “open carry” debate become increasingly uncivil and, in some cases, even threatening. Pro-gun activists have used our stores as a political stage for media events misleadingly called “Starbucks Appreciation Days” that disingenuously portray Starbucks as a champion of “open carry.” To be clear: we do not want these events in our stores. Some anti-gun activists have also played a role in ratcheting up the rhetoric and friction, including soliciting and confronting our customers and partners.

For these reasons, today we are respectfully requesting that customers no longer bring firearms into our stores or outdoor seating areas—even in states where “open carry” is permitted—unless they are authorized law enforcement personnel.

I would like to clarify two points. First, this is a request and not an outright ban. Why? Because we want to give responsible gun owners the chance to respect our request—and also because enforcing a ban would potentially require our partners to confront armed customers, and that is not a role I am comfortable asking Starbucks partners to take on. Second, we know we cannot satisfy everyone. For those who oppose “open carry,” we believe the legislative and policy-making process is the proper arena for this debate, not our stores. For those who champion “open carry,” please respect that Starbucks stores are places where everyone should feel relaxed and comfortable. The presence of a weapon in our stores is unsettling and upsetting for many of our customers.

I am proud of our country and our heritage of civil discourse and debate. It is in this spirit that we make today’s request. Whatever your view, I encourage you to be responsible and respectful of each other as citizens and neighbors. Again, the AGs and PGs when nucking futs. The AGs claimed a victory yet are still going to push Starbucks for a ban. The PGs started talking about boycott even though we are still welcome to carry – open and concealed – in their stores. Both groups missed this very important part – ..this is a request and not an outright ban. I think that second to last paragraph needs to be re-read by everyone. Starbucks is NOT BANNING guns in their stores. They request that you not bring them -specifically the open carry crowd.

It was because of open-carry assholes and whiny gun grabbers that Starbucks had to finally issue a position. Starbucks wants to be left the fuck alone. They don’t want to be they symbol of anything except meh to blech coffee drinks.

Now go be an asshole somewhere else. I think WalMart still allows legal weapons in their stores.