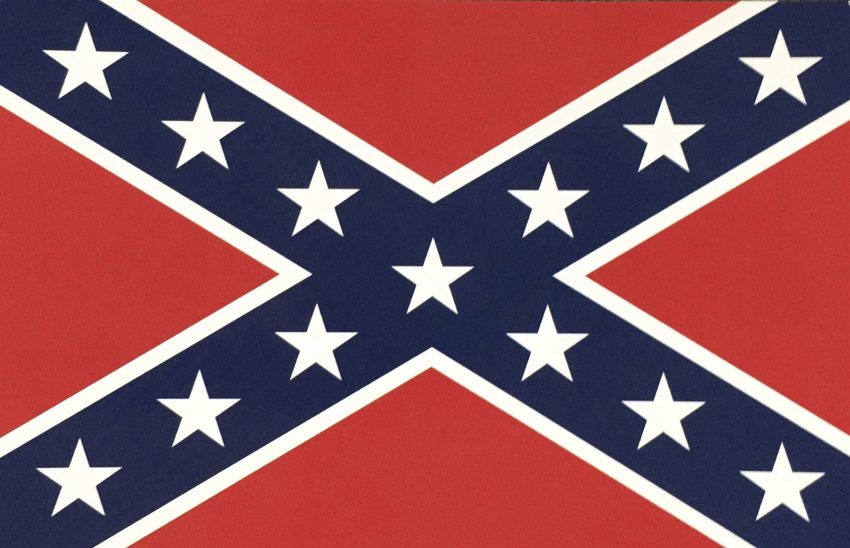 I am a white, European, middle-aged, middle-class, lifelong resident of the American south. I love grits, sweet tea, peaches, and fried chicken. I was raised on Hee Haw. I’ve actually attended a performance at the Grand Ole Opry at the original Ryman Theater. One of my grandfathers is buried in Bonaventure Cemetery in Savannah, GA. I vacationed in Hilton Head, and worked at the Augusta National during the Masters Tournament.

In other words, I’m Southern as fuck. 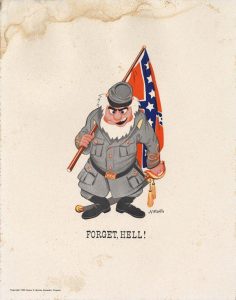 I was raised with the attitudes about minorities and “others” one might expect from such a background.

My grandfather didn’t like the TV show Benson because (and I directly quote – sad that of all the things my grandfather ever said this is the only thing I remember word for word), “A colored man shouldn’t talk to a white man like that.”

I became friends with the only black kid at my (private church) elementary school, but I wasn’t allowed to have him over to play.

Racial jokes and slurs were common in my home. My dad even had a framed “Forget Hell” picture in our house.

In other words, I’m Southern as fuck, and I feel uniquely qualified to comment on the renewed hue and cry about the removal of Confederate memorials, statues, and flags from public property.

When the state of Georgia announced secession from the Union, taxes and “states rights” (things “heritage” folks like to say) were not part of the articles.

The people of Georgia having dissolved their political connection with the Government of the United States of America, present to their confederates and the world the causes which have led to the separation. For the last ten years we have had numerous and serious causes of complaint against our non-slave-holding confederate States with reference to the subject of African slavery. They have endeavored to weaken our security, to disturb our domestic peace and tranquility, and persistently refused to comply with their express constitutional obligations to us in reference to that property, and by the use of their power in the Federal Government have striven to deprive us of an equal enjoyment of the common Territories of the Republic.

The articles of secession mention slaves or slavery 35 times. Manufacturing vs. agrarian economies – one time. States’ rights (not pertaining to slavery) – zero times. So let’s not bullshit ourselves anymore. The Civil War was about the Confederacy wanting to retain ownership of humans as labor (yes, there are ancillary issues attached to that including states’ rights, taxes, and population counts – but it is all rooted in humans as property).

At Lee’s surrender, all soldiers and military leaders were granted pardons and readmission to the Union as long as they surrendered their arms and flags.

So the flag. This is the history of the CSA official flags: 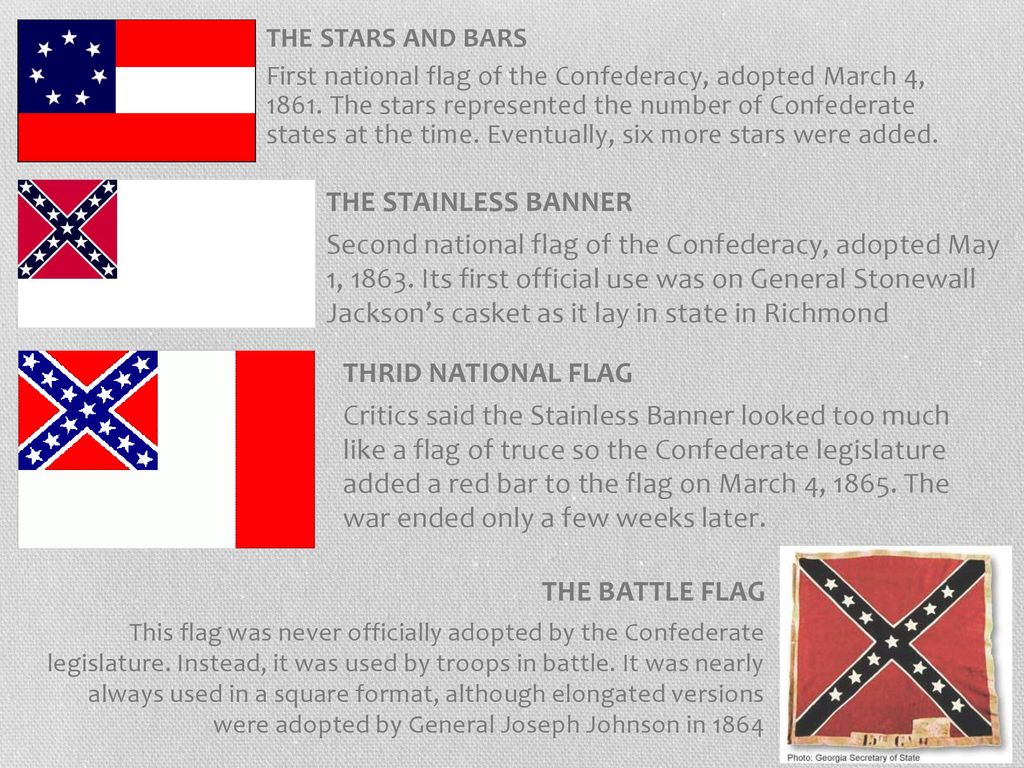 If the “heritage” crowd wants to fly a Confederate banner, they should pick one of these. But they don’t. Instead they fly a rectangular Southern Cross (not “Stars and Bars” thinking it was the CSA national flag. While it was part of the design of two CSA flags (the large white portion, by the way, was meant to symbolize the “supremacy of the white man over the inferior or colored race”- source), it was adapted from the battle flag of the Army of Northern Virginia.

Statues of Confederate leaders started going up in communities and towns long after the Civil War ended. The bulk of them were erected in direct retaliation to civil rights moves – from the Jim Crow laws to the burgeoning Civil Rights movement. Statues of leaders of a rebellion against the United States were erected to again diminish the equality of American citizens. The flag was commandeered as a forceful symbol against integration and equality. It is no accident that it is the go-to symbol for bigots and racists.

The “heritage” of these symbols isn’t hate. It is perceived superiority of white skin to non-white skin.

I feel it is due to the Klan which saved us from Negro dominations [sic] and carpetbag rule, that it be immortalized on Stone Mountain. Why not represent a small group of them in their nightly uniform approaching in the distance? – Mrs. C. Helen Plane on the Stone Mountain carvings

The blacks are immeasurably better off here than in Africa, morally, socially & physically. The painful discipline they are undergoing, is necessary for their instruction as a race, & I hope will prepare & lead them to better things. How long their subjugation may be necessary is known & ordered by a wise Merciful Providence. Their emancipation will sooner result from the mild & melting influence of Christianity, than the storms & tempests of fiery Controversy. Robert E. Lee

And it isn’t hyperbole to facepalm a brief four years of the Confederacy is “heritage”. It isn’t. If you want to celebrate Southern heritage (and I do), let’s celebrate those people and events that elevated people, that united (mostly) people, who changed our country for the better:

It is not erasing history to remove these statues from public lands. It is not erasing history for NASCAR to ban the flying of the Southern Cross at their private events. There are no swastikas or statues of Hitler in Germany, yet history recalls his deeds. There are no monuments to Thomas Gage or Henry Clinton in Philadelphia, but the Revolutionary War is still part of our history. Our history is not lost by removing memorials to Civil War generals. It is important to teach that history – the real history – so that we never repeat that repulsive error.

Our Heritage is not dependent on those statues or that flag. Our Heritage is taking the harsh lessons learned from that brief 4 years, and make the South a better place for all people.