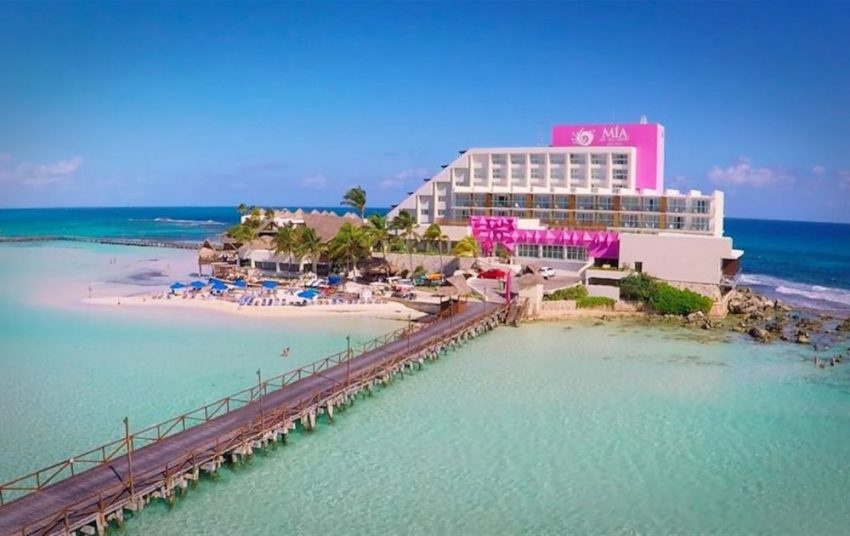 Mia Reef All Inclusive resort in Isla Mujeres Mexico was, overall, disappointing and rates a C – or a 5 on a scale of 1-10.

We chose Mia Reef because I wanted to go to Isla Mujeres, and she wanted to go to an all inclusive. Mia should have given us the best of both worlds. Sadly, it was a disappointment on both accounts.

We are upper middle-aged experienced travelers. Unfortunately, she has mobility issues that have, over the recent years, restricted her vacation activity levels. I like to get out to see and photograph the town, city, village where we vacation. She prefers to sit quietly under the shade, listening to the waves, reading a book, and painting.

Reservations and communication were excellent. Mia arranged transportation from and back to the Cancun airport, and that transaction was as smooth it could be. The Cancun airport gets really crowded outside of the phalanx of aggressive timeshare sellers, so finding your pickup while brushing off people who want to get you in their cab or van can be frustrating.

Check in was smooth with no wait – and we even got a room upgrade. We were given a refreshing cocktail that was much needed after our long, tiring, and hot day of travel.

The service staff – with one exception – were great. They were friendly, warm, and hospitable. Even if you saw someone off the property they were the same. Bravo to them!

The views were astounding. We had a clear view west over the Caribbean, and the sounds of the surf – even 5 floors up – was soothing.

The Rest – Mostly Not So Good

As soon as we were checked in, the concierge, Victor, escorted us to a comfortable nook to explain the property, showed us on a map where amenities were located, and got us another cocktail. That’s when we learned that “all inclusive” meant “mostly inclusive”.

In-room dining is not included, and in fact, according to Victor, not worth the extra expense since we had the other dining options.

The beach beds they advertise on their Facebook page are not included. They are reserved for “members” or available for a minimum $150 bottle service.

Victor then tried to get us to commit to a 90 minute presentation of the Mia membership program. He threw some incentives at us that we weren’t interested in, and I had to get almost angry and rude with my “no”. We were hot, tired, and hungry and just wanted to get to our room to settle in for a vacation – not a sales pitch.

After being on the property for about an hour we were FINALLY escorted to our upgraded room. I booked a deluxe ocean view room that provided a balcony and large king bed. We were upgraded to a “villa” which was pretty much the same as the room I booked with some extra square feet, a bigger bathroom, and additional closet space.

There were numerous problems with this room.

We stayed one night in that room then requested the room I booked. Again, the staff was gracious and accommodating. However, they gave us a standard room with no porch and a queen sized bed. At this point we were so effing tired and just wanted to get our vacation started that I let it go. The front desk staff were apologetic and did refund the difference between the two room types (things go wrong – it is how they are handled that makes a difference – they did good with this).

I mentioned 3½ dining choices. There was the buffet, the cevichería, and the main restaurant, Las Marias (the third and half).

The buffet was horribly disappointing. A Carnival cruise buffet has better food and more selection – and more Mexican food! Seriously! There was an occasional nod to the fact that we were in Mexico with a sopa once, a dry and flavorless taquito, and ever-present frijoles. But truly no Mexican food. And it was bland, boring, and tasteless.

The cevichería was okay, but was only open from 1-6. If you are a noonish lunch eater or that is what you wanted for supper, you are out of luck.

Las Marias was the better of the choices, but that’s because the other choices weren’t that great. There are two parts to the restaurant – the inside “Mexican” food, and the outside grill. However, Las Marias is only open for supper, and both parts aren’t open on the same days. PLUS, you have to make an in-person reservation for dining the next day. They may accommodate your first night there (according to Victor), but you can’t decide in the afternoon that you want to eat there that night.

FWIW, neither restaurant was ever more than half full when we saw them.

It is not inaccurate or exaggerated to say that 100% of the food we ate away from the resort – including the snacks we had at the ferry terminal and the street food in Isla Mujeres – was considerably better than anything we ate on site.

The drinks were plentiful and okay, but they used bottled mixes for the most popular drinks. There was no such thing as a fresh hand-made margarita. Drink serving sizes were about 6 ounces.

The Worst Of the Not So Good

Mia Reef has some serious accessibility issues. As mentioned, my wife has mobility issues and has a hard time walking distances or up/down stairs. All Mia dining facilities and the pool are on the ground level, and the only way to get to them is down steps. There is an attempt at a ramp from the lobby, but it is a long, steep, and slick walk.

There are no steps or ladder into the pool. Getting in or out of the pool requires a 20 inch step. That doesn’t seem like much, but if you have arthritis or even a sprained ankle, it is a difficult task. Again, I praise the Mia staff who were on-hand to help my wife get out of the pool.

We found out by chance that Mia had nightly entertainment. There was absolutely no communication to inform us what was going on, where, or when. We just happened to hear music coming from the lawn one night and saw there was a Mayan cultural presentation. Another night we saw there was a small circus. There were no signs, handouts, newsletters, schedules on the in-room TV – nothing.

The pool has broken tiles with some sharp and jagged edges. My swim suit caught on one and ripped. Fortunately it was an old suit and the rip was small, but the hazard is there.

The property, on closer look, is old. The bright rooms and decor hide many flaws, but there are small cosmetic issues everywhere.

Victor seems like a genuinely friendly person. But the non-stop pitch for the Mia membership presentation every single time I saw him on property was too much. I finally lost my temper – politely – and said, “Victor, por favor, alto! We are not at all interested. Not one bit. Stop!” And after spending a week on the property there is no way I would spend money to be a “member”.