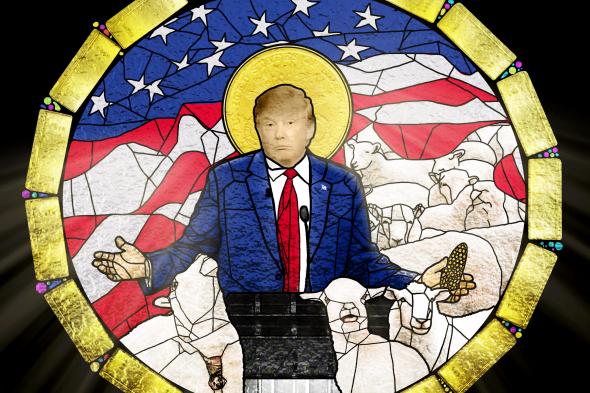 I have been pondering the death of the “Religious Right” for a long time. I guffawed when many who formerly decried the Mormon church as a cult quickly changed their tune to support Mitt Romney.

After they were unable to get one of the 11 candidates that more suited their world and theological views, and in a last gasp effort to not have another Clinton in office, we have them doing wild contortions to justify their support of Trump – a man who in no way, shape, or form represents the Christianity that I grew up with or the Christian friends and family that I have.

The #nevertrump movement is not made up of left wing progressive socialists. It is pissed off Republicans – many of them conservative Christians. They have honestly accepted that the person that is Donald Trump is not reflective of what they want in a leader.

Don’t let this non-believer scold them. As we say, I ain’t got no dog in this hunt. I don’t care what the professed religious beliefs of a candidate are as long as he/she governs by the US Constitution and law instead of their religious texts. Hell, I might actually respect the Cheetoh a little bit if he’d honestly said that he subscribes to no particular religion or denomination instead of claiming to be a Presbyterian and trying to quote from “Two Corinthians“, but he didn’t. He pandered to the dishonesty and hypocrisy of an ineffectual political base that has seen its membership rapidly dwindling.

I don’t know who exactly who Erick Erickson is. Google tells me he is “a politically conservative American blogger who hosts radio show Atlanta’s Evening News with Erick Erickson, broadcast on 750 WSB”. He is also a blogger for theresurgent.com – hardly a home of progressive or non-religious discourse. Erick recently posted an Open Letter To the Christian Right and takes to task those who maintain their conservative Christianity while supporting Donald Trump.

By your actions in Campaign 2016, you have harmed all of our witness. You have made it more difficult to save the lost and more difficult to protect the rights of faithful believers. You have dragged down the reputation of penitent heroes of the Bible to justify the sins of Donald Trump.

The self appointed moral authority of the “Moral Majority” is now an old joke. They have no sway, no pull. They are dead. Their support of Trump – only to oppose Clinton – is the last shovel of dirt on their graves. That is not to say that the religious right is gone, but they, just like the rest of the GOP, will have to retreat to their kennels and lick their wounds for another 4 (or more) years.

Featured image is from slate.com