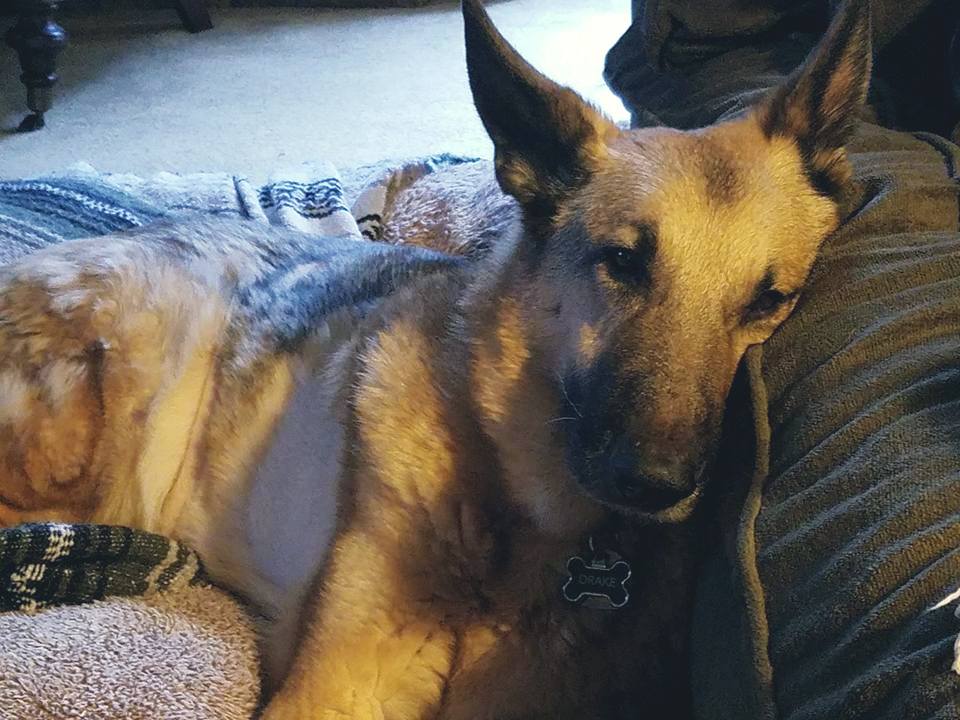 This is a follow up to an earlier post about our German Shepherd, Drake. You can read that if you aren’t up to speed, or click here to skip down if you are.

Let’s get this out of the way – I’m a softie. When something hits me in the feels, I cry pretty easily. But it continues to astound me that some things don’t phase me emotionally, while others, like my big dog (and my two little dogs) turn on the waterworks.

Drake was found as a puppy wandering around a neighborhood. My aunt rescued him from the shelter after the required hold time and took him into her home. In October of 2016, after living with my aunt for 6 years, she had to find him a new home. Even though we already had two dogs, there was no way I was going to let this big beautiful doofus of a full blood German Shepherd end up in a stranger’s home. So in early October 2016, Drake became the third dog in our pack – and immediately, with no warning or alert, became my lifetime favorite dog.

That’s not to say that Max & Guinness are any less loved, but if my love for them is at a 10, my love for Drake is at a 10.1. There is just something magical about Drake. On the way home on his first day, I passed by the Atlanta Falcons training camp. At a traffic light near the camp, a guy in a brand new tinted windows fast looking car next to me rolled down his window to tell me, “Hey man, that is a beautiful dog!” I’m pretty sure it was one of the Falcons, thought I can’t be sure. And that wasn’t the only or last time strangers have said things to me about him.

Everyone who meets Drake falls in love with him. That isn’t hyperbole. People have gone out of their way to say hello to him, to compliment him, to ask to pet him. No one ever does that with Max & Guinness – and they are MUCH more receptive to positive attention. Drake accepts but doesn’t return the affection, at least not very often. He seems to love women more than men. Yeah, he’s MY dog. I shared photos of Drake on Instagram and Facebook, and he immediately became the star of both. At the end of 2016 I got an offer from Parabo Press for a free book of the most “liked” Instagram photos of 2016 – and most of them were pictures of Drake. He developed quite a fan club right away.

Almost as soon as we brought him home, however, his health deteriorated. His back legs weakened and collapsed. Taking him to the dog park (a weekend ritual) became painful and debilitating for him. One hour playing meant a week of painful walking.

Our vet tried everything she could, and, after she ran out vet tricks, she sent us to a specialist for an MRI of his spine – and the darkness hit.

Drake’s spinal MRI revealed myriad problems with his internal organs – fluid in his chest, an enlarged heart, anomalies with his spleen. He was at Death’s door and no one had a clue! We took him for emergency treatment that same day, and after a few weeks our vet let us know that there was nothing more they could do for him. They were out of options, but we could try a specialist to have his spleen checked out. We did.

A few days later – the week before Christmas – we took him to Blue Pearl Vet in Sandy Springs, GA to have his spleen checked. Then, on Festivus Eve, while she was in the car on the way out of town for Christmas with her family, Drake’s vet, Ashleigh Huggins, called to tell us the results from Blue Pearl were in and his infection was gone, his chest was clear, and his spleen was fine. Drake was better!

We had a great Christmas with him, Max, and Guinness. Drake got to travel and met other members of our family who, as has always been the case, immediately fell in love with him. Even my mother-in-law, who isn’t really a dog person per se, fell for Drake.

He was doing great until a few days before a check up when he started to feel bad again, but another round of antibiotics and he was downright frisky for Drake.

….and that is the end of the good news. The first week of February 2017 he started feeling bad again – no appetite, lethargic, diarrhea accidents in the house. Our vet sent us to one more specialist – one last chance – to find the key to Drake’s continued illness. That vet’s first words to me after her examination were, “Mr. Selby, you have a very sick dog.”  We reviewed his expansive medical history since October of 2016. She was amazed we had done so much for him, but after talking about the additional tests, procedures, and surgeries she could do to try to find what was wrong with Drake (not to fix, to try to find the problem) I asked, “Are we at end of life for him?”

So that’s where we are. This big, guardedly affectionate, fuzzy lump of Wonderful is in his last days. We can help him feel better, but we can’t make him better. Antibiotics will work for awhile, but his infection will return. The diuretics will help flush the excess fluid from his chest, but it will return.

So how is it that a dog who hasn’t even been in our lives for 6 months can be so loved and will be missed so much? Here’s what I think. When we love a dog we open up part of ourselves. It doesn’t take much space for a little dog. He can fit right over here on the Love Shelf. But a big dog? Well a big dog has to force you to make room for him. He take up, but not over, a lot of Love Shelf space. He can’t be ignored. A big dog comes into your life the way a courteous fat man takes a seat on the bus – scootching this over that way, and that over this way until everyone is comfortable. But you always know he’s there.

As big of a space that Drake filled in our hearts during his brief time with us, he will leave as big an empty space when he finally leaves us.

In the meantime he will be loved, cared for, fed, cuddled, and loved some more by everyone who has been touched by him. He is truly an angel among us.