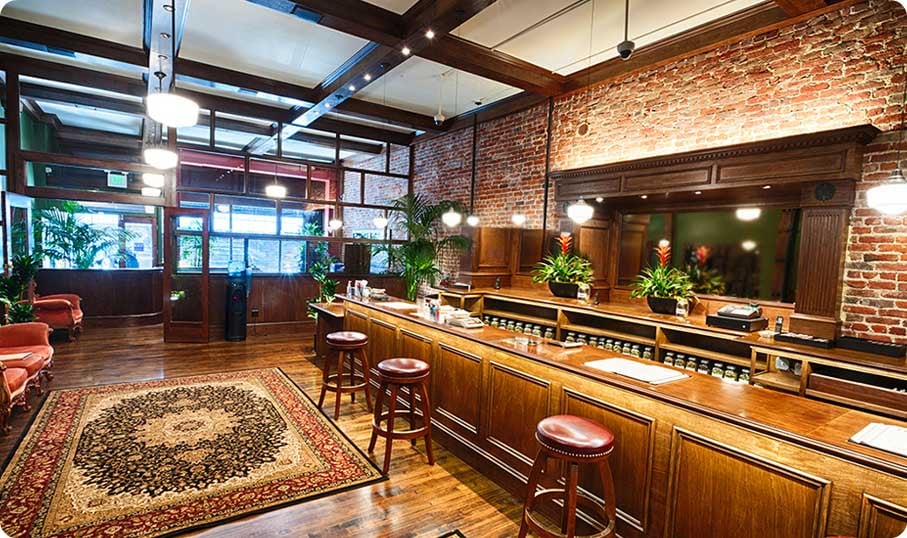 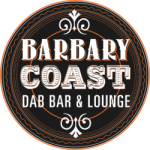 I recently took a business trip to San Francisco. California is one of the 10 states (as of April 2018) where recreational marijuana is legal. As a child of the 80s who grew up buying weed from sketchy people in sketchy parts of town, I absolutely HAD to experience buying it legally.

I found a place near the hotel where I was staying – Barbary Coast Dispensary – and made a trek (pilgrimage??) to visit a legal weed store.

At the door you prove you’re 21, then walk into what can best be described as a saloon – long wooden bar with a mirror behind it – stools where you can sidle up and have a nice long chat with the “budtender” (yes, budtender) who will help you negotiate the myriad choices of marijuana available. Seriously man, check out their menu! I’m no newbie to weed, but ffffffffff… I was overwhelmed and, frankly, way out of my depth when it came to figuring out what I wanted to try. They also had an option of the CBD gummy bears which were extremely delicious.

Sure, I would have loved to have a bit of this, a bit of that, some more that thing over there, but I really had to be judicious in my purchase because I was only going to be in San Francisco for a few days. I had to buy only what I could use because there’s no way I’d try to bring any left overs home! 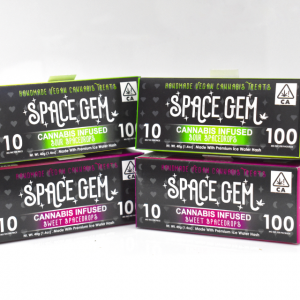 After discussing with the (cute female) budtender about how I like to use (preferred edibles, I guess, since I really didn’t want to go through the hassle of smoking), and what kind of high I liked (mellow and chill, or more giddy and psychedelic – the former, btw) I decided on a pack of gummy edibles and a tin of mints. The gummies are 10 mg of THC each, with 10 in the box. The mints are a “micro-dose” at 2.5mg of THC each. The budtender suggested 1 gummy, wait a few hours, then go micro if I needed or wanted more.

VERY IMPORTANT LESSON FOR NEWBIES WITH LEGAL MARIJUANA – if the budtender says 10mg dose, only do a 10mg dose. You can always do more, but you can never do less! 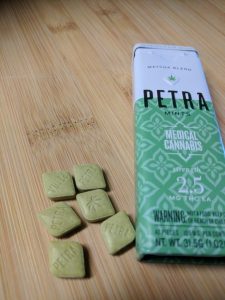 Packaging was weird. All of the products had their own packaging, but the dispensary has to repackage stuff in un-adorned, difficult to open bags. Ostensibly this is to prevent children from being attracted to the packaging. I guess that is a reasonable concession, even if it does add cost. Then my re-packaged purchases were placed in an opaque black zip-loc bag with a child resistant closure – another mandatory thing. Curiously, that zip-loc is also air tight. Go figure.

I got back to my hotel and ate a gummy. It wasn’t very good. It tasted like a gummy made with marijuana. There’s just no hiding that. But it went down quickly, and all aftertaste was washed away with a glass of water. Then I went back out into the Streets Of San Francisco to let my high come over me. It did. For the record, 10mg is enough to get a good buzz on.

Unlike the “whatever we managed to get” in the 80s, this stuff was really good, and the high lasted a lonnnnng time. I wasn’t whacked out stoned, but I was definitely high.

I did do a micro-dose with the mints one evening. The high was like two glasses of wine. Mellow and quiet.

I have to say that even though it is legal, I still have 30+ years of Georgia paranoia surrounding me. I was certain I would get busted just for carrying it with me from the store to the hotel, but the sight and smell of folks just toking on the streets soon took care of that fear.

So – yeah, I cam to California and was a marijuana tourist. Now come on you other 40 states, and get with it!