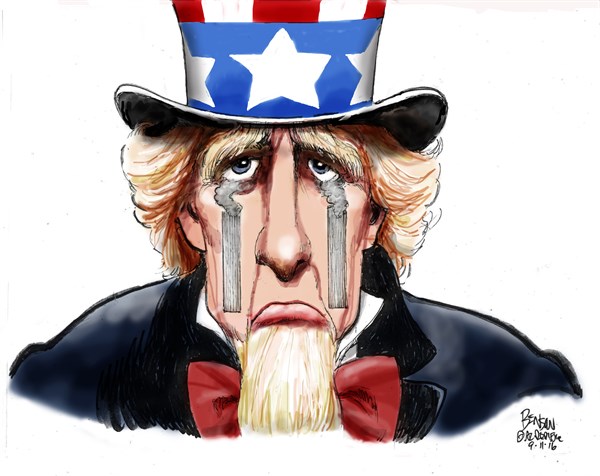 I am almost speechless. I am appalled, conflicted, angry, sick to my stomach, sad. This post is mostly for me to work through my thoughts and feelings.

Where Were The Police?

The police are not a monolithic entity. They are men and women who live and work in varied jurisdictions with differing levels of training and leadership. By all accounts the Charlottesville police tried to keep peace in a difficult situation. They lost. The violence escalated and they couldn’t be everywhere at once. They could only respond – not prevent.

Both sides complained that the police did nothing/instigated events.

Let’s not forget that two Charlottesville police died as well. It wouldn’t surprise me to find out that someone shot their helicopter.

Judging from the pictures of some the “protesters”, khaki pants, white golf shirts, and red Make America Great Again caps – the way Trump dresses for the golf course – is the new uniform of these racist thugs. Yes, they are now cosplaying Trump while they chant Nazi slogans.

This is the full context of the Hillary Clinton “basket of deplorables” comment:

You know, to just be grossly generalistic, you could put half of Trump’s supporters into what I call the basket of deplorables. Right? The racist, sexist, homophobic, xenophobic, Islamaphobic — you name it. And unfortunately there are people like that. And he has lifted them up. He has given voice to their websites that used to only have 11,000 people — now 11 million. He tweets and retweets their offensive hateful mean-spirited rhetoric.

The deplorables in Charlottesville are convinced that Trump is on their side, and that they are even doing Trump’s work. They are emboldened and encouraged by his rhetoric and

It took two full days for Trump to specifically call out the racists who started this shit. This after initially laying blame on “many sides”.

I won’t call Trump racist, but I do think he is callously insensitive to non-hetero non-Caucasians. He’s the kind of guy who would say, “I’m not racist. I appointed black guys to cabinet positions.”

History Lessons And That Flag

The Civil War was about slavery. The “states’ rights” argument is based on slavery. The war was fought to keep the United States united. The South, the rebels, lost. Monuments to Civil War characters are monuments to traitors and the losers of that war.

Heritage my ass. The Confederate battle flag is not heritage.

Nazis were the enemies of the US – and the world – during World War II. My grandfather fought against them. Their ideology is un-American and traitorous.

The Elephant In the Room

Christianity. Yeah, I said it. I’ve said it before, there is no such thing as Christianity. Its various definitions and proscriptions are frequently contradictory. That is never more evident than the with the Christian faith leaders who led peaceful counter protests, and the “God’s Army” beliefs of many white supremacists – each saying the other is a false Christianity.

Yes, those factions of the Unite the Right protests who believe God is on their side are Christian terrorists.

I have long been aware that I live and work in decidedly non-diverse world. I don’t have black or brown friends. I am friendly with many, but I am friends with none.

I don’t regularly associate with black or brown people. I live in a very upper middle class Caucasian neighborhood in the exurbs of North Georgia. I have a mid-level IT/Marketing job where I work with a lot of women, but only a few minorities.

I am insulated from the trials and travails of the brown and black acquaintances I have, unless they show up on Facebook. By the time they make it to Facebook, however, it is a reaction to an event.

I need to change that. Bigly.

Where Is The Photographic Proof, Fat Boy?

I have a lot of photos of Charlottesville assholes I was going to include with this post, but I don’t want to give them any publicity or recognition. Plus, as I learned via social media, some people won’t believe the evidence anyway. Too many idiots think it is all part of liberal media agenda to make conservatives look bad. Fuck you.